The CPN Institute functions as a clearing house and point of coordination for the production of its work. The CPN Institute actively pursues areas of inquiry, research and study from the following primary sources: 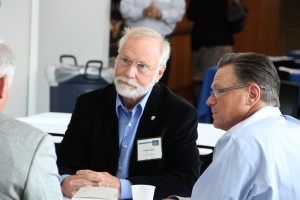 In response to each opportunity approved by the CPN Institute’s Board of Directors, the Chair of the CPN Institute forms a research project team using the resources of CPN Members, participating academic institutions, and industry trade and professional associations. The CPN Institute administers the performance of work and publication of the final studies.

As an example, in 2000 the State of North Carolina released an RFP to study the financial impact of the pending introduction of the International Building Code. The scope of the study exceeded the ability of any single firm to respond. However, using the pooled resources of CPN’s multi-disciplined members, a team of member firms collaborated to perform the study.

Nearly 4,000 man-hours were devoted among the participating firms to the final report, which was completed and submitted to the N.C. Office of State Budget Management and Planning. The report was ultimately presented to the North Carolina State Building Code Commission.